Skip to content
HomeHedge laying, the what and whys!

In winter, hedgerows can be feeding and roosting sites for birds (RSPB, Value of hedgerows for wildlife)

Before volunteering with the Nottingham Wildlife Trust I knew very little about hedge laying or why it is beneficial. Later on I gathered a much deeper knowledge while studying horticulture at Brakenhurst (Nottingham Trent University) along with this wonderful skill.

Hedge laying is a very old traditional skill which is in decline within the UK due to the increasing number of hedges which are cut by industrial/hand held machines instead of being layed, increasing numbers of barbed wire/panel fencing and an ever decreasing number of skilled practitioners. Combined with the higher cost of laying a hedge when compared to simply cutting it back, people often go for the cheaper option to the detriment of your hedges health, life span and environmental worth.

Hedge laying was traditionally used to create thick healthy barriers to contain livestock, but laying hedges is actually a great, sustainable and environmentally friendly way to regenerate and reinvigorate hedges while increasing the biodiversity which the hedge supports, increasing the hedges life span at the same time.

Many hedges which are not maintained become sparse and thin at the base, with very little or no new growth. Also due to the density of planting within a hedge, sections can die off leaving gaps. This reduction in ground cover means many birds which nest low in hedges such as wrens, robins, dunnocks and whitethroats lose valuable nesting grounds.

This loss of ground cover also increases erosion around the hedge and leaves many mammal species exposed and vulnerable. Species such as the European-protected hazel dormouse, bank vole, harvest mouse and hedgehog find shelter, breeding ground and food sources in dense hedges with plenty of ground cover.

How does laying a hedge work?

Stems are cut during the dormant season leaving a thin layer of the cambium in tact, after this a billhook or similar tool is used to cut away most of the wood down to the cut until the pleacher (name of the stem in hedge laying) becomes flexible and can be laid down between a 35o and 45o angle. These are then woven in between supports spaced around 18″ to 30″ apart, depending on the style being used. As each pleacher is laid, the hedge becomes thicker and sturdier. Next year vigorous new growth will sprout from the low cuts in the hedge leading to a full thick hedge with plenty of habitat and food for wildlife. 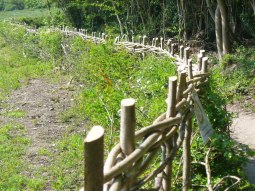 Dead-hedging is the process of weaving brash (the cuttings from the hedge) back into the newly laid hedge. This is a great way to protect the vulnerable pleachers while they heal and also fills in gaps until the next growing season. The dead wood in the hedge creates great habitat for various insect species over the cold winter months.

Got an allotment, or want to start a food garden? We can help you plan, start and maintain your allotment/food garden from design to digging contact us for more details

Lean about your favourite plants/habitats in our Plants & Habitat Database