The genus Skimmia belongs to the Rutaceae family which is currently comprised of 4 species, all of which are evergreen shrubs which can tolerate drought and air pollution. Hailing from warm temperate regions of Asia, these delightful evergreens have clusters of leaves at the ends of shoots. Depending on the species, leaves are usually around 6-21 cm in length and 2-5 cm in width with a simple lanceolate shape and a smooth margin. Skimmia fruits are usually 6-12 mm in diameter and reddish to black in hue. Skimmia produce dense panicle clusters of flowers, with each flower around 6-15 mm in diameter featuring 4-7 petals per flower. Cultivars of S. japonica are the most common form of Skimmia used within the UK, the flowers and fruits make this evergreen a valuable source of food for birds and bees.

Skimmia are dioecious plants, meaning you get male and female flowers on different plants, as such it is important to plant female and male plants close together in order to ensure the female plants will bear fruit. 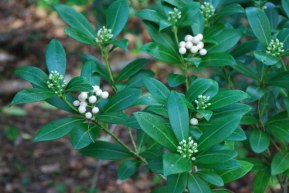 Skimmia are also easy to maintain due to minimal pruning requirements, they are slow growing and compact meaning only damaged and diseased material needs pruning around mid-spring time.

Species within the Skimmia Genus

This frost tolerant species of Skimmia is native to the Himalayas, featuring bright pink flowers and decorative fruits, this upright shrub grows up to 2 metres in height and can be prone to spreading.

S. anaquetilia has been hybridised with S. japonica to create the hybrid Skimmia x confusa. Study’s have shown that the leaves of S. anquetilia are high in antioxidants and mixtures with turmeric have been used to treat swellings and rheumatism, while mixtures with bark have been used on burns and wounds.

Hailing from China, Japan and south sout east Asia this round evergreen shrub can grow up to 6 metres in both height and width! Leathery green leaves and small beautiful white flowers followed by red berries on the female plants make this a create choice for borders or larger containers. Many cultivars exist of this Skimmia species including some which earned the Royal Horticultural Society (RHS) award of gardening merit such as ‘Rubella’ and ‘Fragrans’

The ‘Rubella’ cultivar is a smaller compact evergreen shrub which can grow to around 1.5 metres in height and width, featuring dark eliptic leaves up to 10 cm in length and flowering in early spring with fragrant white flowers, blooming from panicles of red buds. This cultivar is male and will not bear fruit.

‘Fragrans’ is a smaller cultivar then ‘Rubella’ growing to around 1 meter in height and width with a bushy habit which forms a low dome. ‘Fragrans’ have obovate leaves, dark green in hue growing up to 10 cm in length. ‘Fragrans’ lives up to its cultivar name by producing  clusters of smal white male flowers which are highly scented. This cultivar is male and will not bear fruit.

Native to north China, east Asia and the Himalayas, Skimmia laureola’s grow up to 1.5 metres in height/width and are hardy to zone (UK) 7, flowering between April and June.

Skimmia arborescens can be grown as a small/medium tree or as a large shrub.Grown as a tree S. arborescens can achieve heights of up to 8 metres, with branches that are small with a prominent pith. S. arborescens has leaves which are elliptic, oblong to obovate-elliptic between 5-18 cm in length and 2-6 cm in width.

Lanceolate: A lanceolate leaf is a simple shape which is lance shaped, tapering at both ends.

Monoecious: Plants which bear male and female flowers on the same plant

Obovate: Refers to a reversed ovate shape which is a teardrop shape, the stem of an obovate leaf attaches to the tapering end.

Ovate: Refers to a teardrop shaped leaf with the stem attached to the wider end.

Panicle: This refers to an inflorescence which is branched, often the branches are racemes.

Raceme: A cluster of flowers attached by short stalks of equal length and distance along a central stem

Got an allotment, or want to start a food garden? We can help you plan, start and maintain your allotment/food garden from design to digging contact us for more details

Lean about your favourite plants/habitats in our Plants & Habitat Database